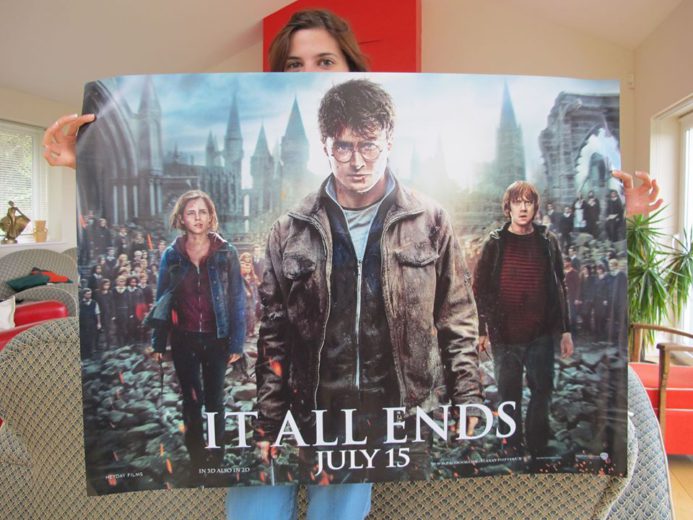 Day One in Harry Potter and the Half-Blood Prince

Euphoria, that’s all I remember feeling. Pure euphoria.  Six oc’lock me and Mum rose from our beds, and then half an hour later-

There I was, sat in a car on my way to filming Harry Potter.  The clouds were grey and dull, but the excitement that pulsed through me contradicted them.  Ramrod straight, I glanced out of the windows as set after set blurred past; a smear of colours collecting on my mind.  First, Privet Drive, then Grimmauld Place.

I couldn’t believe that I was actually there! Those two auditions had been worth it.  After we skipped into Leavesden Studios, the happiness that consumed my body was a never ending stream.  The canteen sparkled, smells of freshly cooked breakfast sifting across the room, my nose tinkled and when at last I had my plate, I ate little; too engrossed in the surrounding magic.  The person who plays Luna Lovegood (Evanna Lynch is her name) entered, dressed in a long teeshirt, and flowing skirt.  I couldn’t- understand.  Just the other night I was looking at a picture, now she was right behind me!  Nothing escaped my lips, as I sat, mulling over my fried bread.

Afterwards, we filed out into the corridor, running off for the costume department.  Of course, I knew it was going to take the longest to get me ready.  I’m always a problem, and especially on a day like this, I figured that my worrying was not going to help.  However, wonderfully, miraculously, there wasn’t any trouble.  Slipping into my civilian costume, I rushed into makeup.  My euphoric balloon was about to burst, and I hadn’t even arrived on set.    The makeup was sprinkled on, and dashed with a line of lipbalm.  My hair was even straightened, and all the time I sat there, staring into a mirror that I couldn’t believe was showing my own reflection.  The girls were really nice, and fixed me up without impatience.

The crowd director looked to me, and I jumped up, ready for the filming.  I fell into step beside her and the floor nearly swallowed me.  There I was, stood looking out to a world of corridors, sound cameras, tents, and a sea of rushing people as they shot past me doing their job.  What a job! Working on the set of Harry Potter, it must be a dream! The walls of Hogwarts magnified as me and a couple of other extras shuffled onto the pavings.  The script was brandished in front of us, relaying what it is what we had to do.  My eyes grew as big as Bludgers as I moved forwards, taking in all. There were huge orange lanterns, and Evanna Lynch was dressed in this lovely dress, I can’t remember what colour.

Whilst passing, I said ‘Hiya’ to James Phelps.  He acknowledged me, and replied the same.  I couldn’t believe it.  I may sound like I’m repeating myself, but my mind was everywhere yesterday morning.  Shaking off the fact that one of the Weasley twins had just welcomed me, I concentrated hard on what I what was to be doing.  It turned out that I was the only fan there.  Live flames, and another line of stone walled corridors, I walked across, a slight sneer hovering, and after an excitable chatter to the other extras in character, that was me ready.  Being in Slytherin, I made specifically sure to express my sychophantic arrogance.  It was horrible pretending to hate Daniel, when in real life, I love him.  Happiness gulped me like a greedy giant, ecstasy swimming inside.  Swaggering forth, adorned in my purple hoodie and trousers, I did the best I could, making sure to suck in all advice from around me.  I was happily surprised that I got a ten out of ten for my performance as an extra, (even though all I had to do was pretend to whisper.)

We came off set, and my eyes nearly popped out of their sockets.  Tom Felton was standing cooly, drinking coffee and chatting with Jamie Waylett (Crabbe) and Josh Herdman (Goyle.) Apparently, my delighted self leaked through, because my other extras actually said to me, ‘Rachel’s gone.’  And I had, I really had. My face had glazed over like treacle, and I could only pick out the slim, arrogant sexy form of Draco Malfoy strutting fast in his long robes.  I was an ant peering through the soil.  I could take in everything at once, yet felt so small in comparison.  It was all over too quickly.  One second we were filming, the next-  I was home.   I hope I am going to go back, as this truly was, one of the happiest, most memorable days of my life.

2 thoughts on “The Magic of Being a Harry Potter extra…. the best backstage bits! Day One <:) EDITED: FOUND OLD DIARY!”