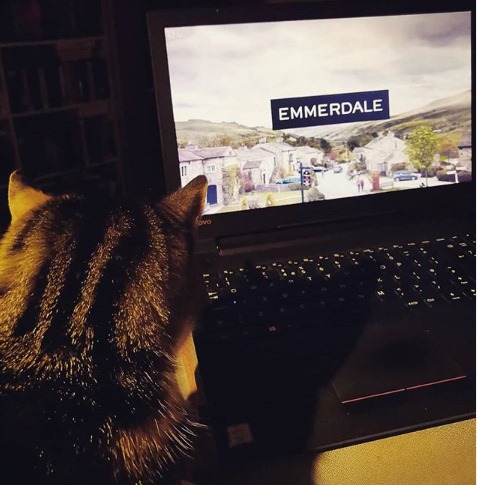 Despite this new obsession (I have so many in the collection!) I’m not – generally – a girl who likes soaps. Back in the day, I used to catch ‘Eastenders’, and ‘Hollyoaks’, but usually only when a story line grabbed my attention. Hello the Kat, Alfie and Andy drama! I’ll never forget the classic wedding crashing….

Anyway, I often saw ‘Emmerdale’ clips, but just when they involved my favourite character, Robert Sugden.

Then, something happened last year in January….

I decided to trace one of the other faces from the series; Lachlan White; a vile, nasty, spoiled teenage killer. Gulp. Out of curiosity, I put his name and Robert’s into a youtube search, actually just to see if they’d – at least – known one another…. The result? It brought up a thousand clips, and I soon found that they hated each other. As a writer whose absolute fuel is conflict in her books….. this was gripping. No. More than that. I was hypnotised. I wanted to know everything. Why did Lachlan loathe him? Their history had to be analysed, read about (Emmerdale wiki was good!)

After somehow managing to locate further clips, I realised there was so much going on at Home Farm. There were secrets, lies, manipulations, greed, and so much cheating! Now, I can’t believe I’m going to admit this, but ‘Emmerdale’ is an obsession that also takes up a lot of my brain. (To really be valued, as ‘Harry Potter’ is always there, but the fact that I’m thinking about Robert, Lachlan, Chrissie, and Aaron AS much says a LOT.

Last night, I had a dream that Lachlan sought more revenge on Robert….

In my next post on the ‘Emmerdale’ vein, I’m going to be talking about why I like Robert so much. What is it that compels me to watch him? Also, you’ll get to see some fanfiction script (a crossover with ‘Riverdale)

As my cat’s name is Emi, it’s now a running joke that she watches ‘Emidale’ with me.