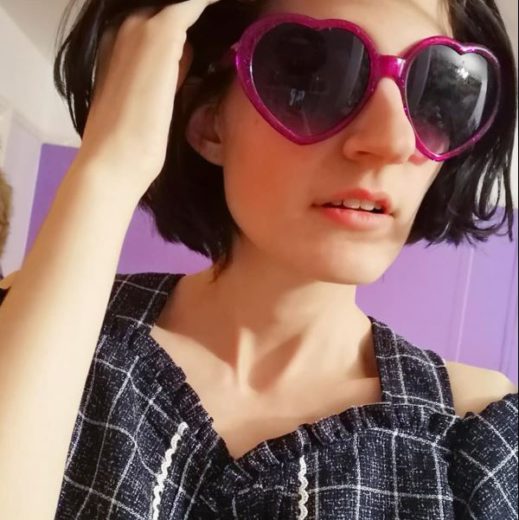 I was never into clothes for years, and honestly, my poor Mum would despair. She would always tell me that I should care about what I look like, not just for my sake, but for other people.

I didn’t listen. Why should I? I was happy being who I was, and that was an individual who embraced her laziness.

Yes. It was pure laziness. I would have much rather spent extra time singing along to Disney, or writing the latest Harry Potter fanfiction. What did it matter if my jeans had blue biro on them or if I hadn’t remembered to bring down my school uniform for ironing?

It wasn’t going to make every member of Busted walk into my English classroom. It wouldn’t make anything better. Clothes were just parts of material that you needed in order to sustain modesty. That was it. My hair would often be un-brushed, tangled, and I’d go on the bus looking like I’d fallen backwards into a bush.

As the years went by, I started taking a little more of an interest…. At the end of year ten, I’d somehow managed to attain a sort of ‘rock star’ style that – even to this day – I have no description for, other than my simply trying to fit in with the cool kids.

More on the term ‘cool’ in another entry soon.

When my best friend introduced me to one of her favourite bands, Panic at the Disco, she showed me a world of black eyeliner stars on the face, bright clothes and caps. It was unlike anything I’d known, and I thrived on buying this emoey mod look.

This phase lasted until my later years at university, but during this time, I experimented wearing clothes that Rachel Berry loved (The main character in Fox’s Glee.) I was obsessed. That was when I learned about the existence of her west end heroines, including Barbara Streisand. Rachel wore vintage. Constantly.

I don’t think my love of it originates from the show, though. My Dad and Step Mum are big fans of the 1920s – 1960s period. I was often watching TV series set in these periods. They visit a hotel where Agatha Christie was inspired for her books. That’s not to say I didn’t have my own voice concerning these eras, but I felt drawn to them; and never understood why.

Needless to say, by the year 2002…. I was swept up in a universe of Potter jumpers, and the vintage style idea was kind of pushed aside…. until my friend, Amy, (who I now refer to as the ‘Fairy Godmother of Fashion’) said that I had style, but that she could help me bring out my ‘chic’ style. I took her up on that.

The next thing I knew, we were taking a shopping trip to ‘Primark,’ and up-dating the clothes I had. When I unpacked, I sorted out my wardrobe; throwing away outfits that had seen the better light of day. A few months later, I was feeling more confident about who I was inside, although of course, I’ll always be like this really:

As you know, I’ve pulled out the vintage love again recently; and these clothes are where I belong. I can’t describe the feeling I have when I dress up in styles from long ago. I’m braver. I’m happier. I can take on the challenges that the days throw at me, and there have been a lot this month (more on that soon.)

The images below make me smile. They give me that confidence that had been hidden away for so long. They hand me a girl power I’ve never felt. I actually look forward to getting dressed in the morning, instead of dreading how long it will take.

That, to me, is the sign that you’ve eventually found a style that will suit you, for a very, very long time.

Anyone else have fashion disasters?

What are your best outfits?