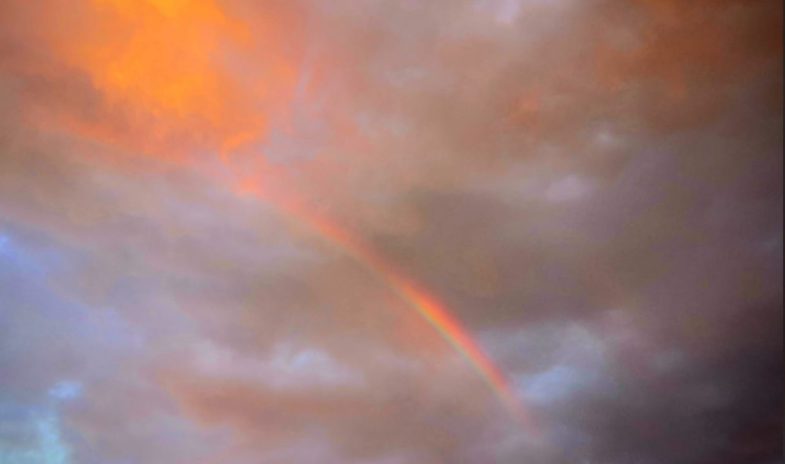 I don’t know if I believe in ghosts?

I’ve always been open minded, and I’ve embraced the idea that there is something ‘out there’ that we don’t quite understand in ‘this world’, but I rarely have experiences that make me question my beliefs in something beyond what we see and know every single day.

Mum was a firm believer in them. She even told me – many years ago – that she’d participated in a ouji board meeting with her friends and had to run from the room, because she was so upset….. I really wish I’d pushed her more on why this was. What happened that day? Why – as someone who has never been a religious person – was my Mum so convinced that spirits existed?

In our house, a picture has ‘jumped’ from the wall in the bathroom, and, she told us, mugs leapt from their hooks in the kitchen – one by one – in order of how they were hung. I believe her, but I’m still not sure why? Maybe it’s because Mum has never been one to lie about something ‘spiritual’ or perhaps it’s because a part of me wants to think there really is a poltergiest in the house….

Regardless, since her passing, I have talked to Mum on a weekly basis, giving her an update on what’s been happening with me. It’s almost like she can hear me, and that’s strange for me to admit because I never really thought much about another existence.

I’ve always been intrigued – you only need to study my ‘Life On Mars’ obsession to know that, and my obsession with lucid dreams (more on that later) but the notion of other worlds never lived so much in my subconscious before, not until I’d lost Mum.

Before I tell you what happened, I’ve just put on ‘The Woman In Black’ soundtrack music, as I think it’s appropriate for the current mood of this entry. Anyway, what I really wanted to tell you about was the incident that occurred around 1am this morning.

I was ‘talking’ to Mum in the bathroom and said, “If you can hear me, can you please give me a sign?” Immediately – not even a minute later – the tap dripped. I was there, going, well, there’s a simple explanation. There has to be. After all, taps drip all the time, or quite often at least, but then – I waited, and I waited, and I waited, and I waited. Nothing. I even approached the bath, peering intently underneath the tap. There was no water under the mouth of the tap. It didn’t drip. Once. I must have waited for a minute and a half, and bearing in mind that it hadn’t dripped at all when I’d come in about five minutes earlier.

I was really compelled by the act, and also a little unnerved! If it was Mum, then I will learn to listen out for more things happening. If it wasn’t Mum, at least I have been given a sense of comfort that – real or not – will help me through the dark days.

Does anyone else have any spooky experiences they’d like to tell me about? Please let me know, I’d be really interested to hear them.

Now, slightly connected to this, at 6am – 7am, I had a lucid dream. It was the first time I’d had one in about six months; a real, proper full body experience in the ‘I know I’m dreaming’ state. I found it fascinating that it was after what happened earlier in the bathroom, almost as though Mum gifted me with the dream. Towards the end of her life, she was interested in lucidity and she knew how much they meant to me.

Anyway, I’m going to describe the dream to you as best as I can.

I ‘woke’ up in a room with a swimming pool. I felt the tiles underneath my feet. Next thing I know, I walked past long tables with so many people sitting at them. The people are chatting. I can hear them, as vividly as waking life. I almost go up to one, and then decide what I want to see more: As I’ve been away for a while from the lucid world, I don’t ask anything difficult. I’ll need practise for ‘deeper’ subjects. No. I look up, and just say, “I want to see my dream counsellor.” He appears instantly, in a patchwork of colours. He’s a bulky man; smiling at me.

Me: Oh my god, hello! How are you? It’s been ages! We shake hands Wow, your look has changed!

The Dream Counsellor: Yes, it has, hasn’t it?!

I go on to ask him if he thinks a writing break is a good idea. He doesn’t answer in words, he hands me a card that has been handmade with a pop up 3D squirrel on the front. I thank him, and he says, “Well, it would do no good to do writing at the moment” or something along those lines. I nod.

A bit later on in the dream, there’s some wooden statues in the distance, and another dream character says to me, “The wooden people are the size of four courgettes.” This is why I love dreaming, because you have no idea what’s going to be produced. I smile and laugh.

There was the start of a room with a top with no head and trousers, maybe a uniform, floating, (probably influenced by my Ashes to Ashes binge watching) before I moved on and saw a tiny Rainbow in the corner of my eye.

What else happened? Oh, I had to jump up this kind of waterfall thing by holding onto a clownfish and reaching the top…. It felt so real. The colours were faded so I waved my arm and the colours turned HD; always a good trick if you’re surrounded by fading shades!

As always, if you like what you’ve read here, please feel free to follow my blog on the email sign up to the right. Oh, and I don’t update regularly; only when something needs to come out! 🙂

1 thought on “Was that my Mum, and a brand new Lucid Dream!”