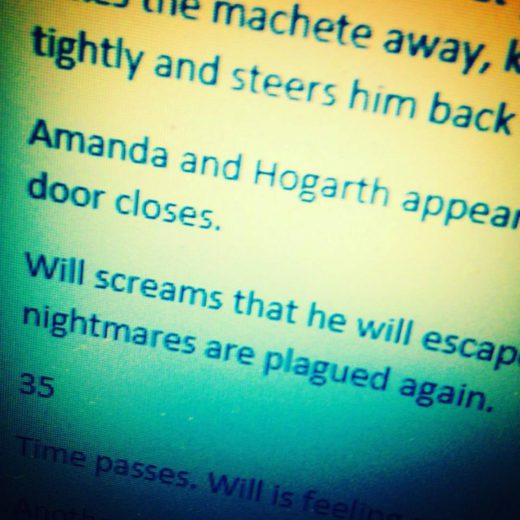 “What shall we throw, George?”

“I don’t know, Fred, what do you think we should throw?”

“How about nothing?” said Ginny, “We can just de-gnome the garden like always.”

“That’s boring!” chorused Fred and George, their eyes falling on a basket of eggs…

“I bought a new one, ‘arry!” Hagrid said, with a tinge of pride, “Tell ya what, I’ll make ya a cuppa…” He grunted, switching on the kettle.

Harry frowned, a horrible feeling imploding. “What did you buy?”

“Olaf wants us to make breakfast,” said Klaus, taking off his glasses, “…. and then we have to clean the house, before his show tonight….”

In response, Sunny bit through a pencil.

“I’ll tell you what else’ll be popular if I don’t see my soddin sandwich, sunshine, you..… off this case!”

The Guv wiped his mouth with a tattered tissue. “You say that like it’s a bad thing!”

Arthur raised an eyebrow. “Tell me, that’s an order!”

“You know, the royal chickens…”

“I’ve never noticed before,” said Merlin, “….. but your head is shaped like an egg.”

Arthur blinked at him. “Excuse me?”

“Well, I mean, picturing you without hair, there’s definitely a resemblance….”

Hiram sneered, brushing down his jacket, “He’s made his bed….”

The Lost Boys dined on a gigantic spread beyond even their wildest imaginations; eggs, cures of meat, glistening vegetables, bread, and when they had made their way through all of this, an orange and berry flavoured jelly….

“What a feast!” crowed Peter Pan

“The old jail smells like rotten eggs,” said Guy of Gisborne, “- It was my idea; I thought the scent might make the prisoners talk; confess to their crimes with Hood….”

“Much had eggs for breakfast,” Robin said, taking a seat beside Marian, “I’m afraid we just have berries this morning….”

Marian giggled. “As long as I’m with you.”

“There’s no fear on that front,” said Robin, parting her fringe. “I’m not going anywhere….”

Will Worthington and The Black Rainbow

(not in book, improvised due to week’s theme)

“Hey, Will,” said Amanda, glancing up from her cereal, “What’s the one food that you hate?”

Will frowned. “There’s not just one,” he admitted, scraping his chair, “- but eggs have to be way up there….”

“NOT ENOUGH PINEAPPLES!” Aldaberto screamed, rushing towards the table. Will and Amanda exhanged a humoured glance.

“I need at least another three pineapple pies, one pineapple soufflé, and lose the egg tart – not important!”

Will scowled at the rich tapestries. “You know what I’d love to do to this place?” he said. “Right now?”

Amanda shuffled her feet. “Go on?”

“Mrs. Hudson, where are the eggs?” Mrs. Hudson tottered over, crossing her arms. “Sorry, dear?” she said, “The what?”

Sherlock groaned. “Eggs,” he said, “I need them for my new experiment.”