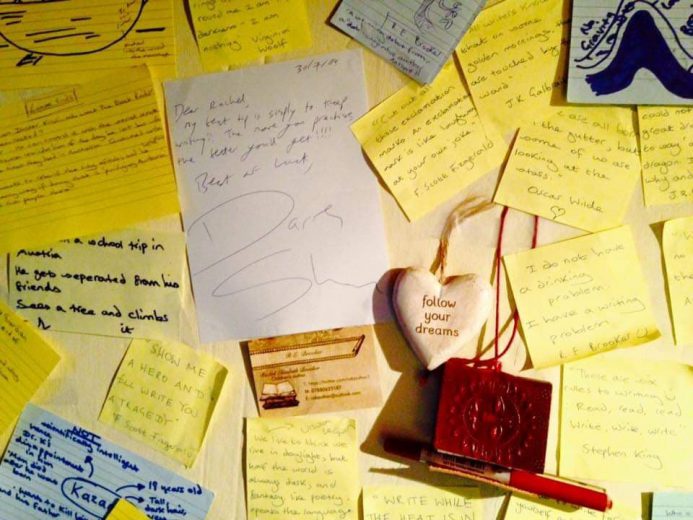 “You might be inspired on this trip.” I never thought those words would actually resonate with me. In September 2007, I started the first draft of my upper middle grade novel, deep inside the heart of an arboretum in Gloucestershire.

Two hours later, I read out three pages in the university chapel, and people really enjoyed it. From that moment, I was writing until the early hours of the morning.

In just two months, I had completed it.

Cut to 2015. I was working as a bookseller in ‘Waterstones.’ “You should read ‘Beetle Boy, we think you’ll like this.” I did. After reading the children’s book of the month, I tweeted the author M.G. Leonard. We started chatting. I told her that I wanted to be an author, and she told me about a children’s editorial academy…..

Fast forward a year. It was my last night in Spain on a holiday, and I heard that I’d been accepted into the prestigious children’s editorial academy, ‘The Golden Egg Academy.’ 1 in 4 applicants get in. I actually cried, disbelieving what the email said.

I had the opportunity to work on getting my book published!

Over the next three years, I was assigned an editor and worked the hardest I’ve ever worked. Through my Twitter account, I gained a following that was beyond my wildest dreams. From May 2015 – December 2019, I’ve managed to connect with over 16,000 other writers, lit agents, and a handful of publishers.

These contacts on social media include Anthony Horowitz, Darren Shan, Simon Mayo, and Lemony Snicket. It’s incredible. I want to be a traditionally published author so much that it actually hurts to think about it.

However, doing this hasn’t always been smooth sailing. I’ve had my despondent days, the times when I thought the book was rubbish. I’ve had tears, frustration, annoyance, but every writer experiences this. The point is, I’ve reached the stage (now, almost twelve years since I began) where my hope has been rekindled.

Recently, my new editors have sent me a full report. It filled me with positive vibes, and all those doubts that had accumulated have now just vanished into a black hole.

2 thoughts on “‘Will Worthington and The Black Rainbow’: My Novel, My Dream.”