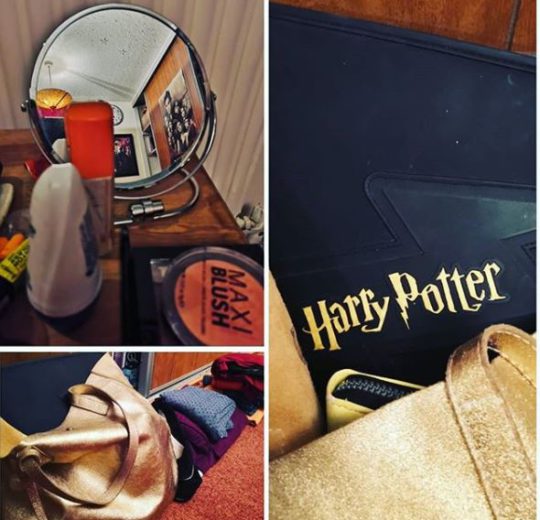 I’ve tried to say to myself that I’ll be fine, but it’s hard when you really want something to go right. I obviously care about this role a lot, already.

I’ve packed my bag for the morning, with everything I need, and more. Say goodbye to disorganisation! There’s a ring binder inside; a pencil-case with tons of pens, erasers, a ruler, and highlighters. I also have a notebook with a ‘To Do’ List, and golden stickers as well.

Tonight’s plan? After calming down the persistent headache, I did a bit of colouring, and then pajamified (a phrase I made up, which means ‘changed into pajamas.’) The rest of my clothes for the week have been stacked and folded up neatly right next to the bag I’m taking.

My makeup is on the beside table, so I don’t have to go and rummage for what I need at 6am. Yes. That’s the time I’m rising. I’ll just require some blusher, foundation and subtle eyeshadow…. but it’s best to have everything ready and waiting.

I’m also writing a list a bit later, so I can tick off everything I must remember. Note to self, contact dentist and library!

Bedtime will be at 10pm. Eesh.

Whether or not I sleep at all…. is another matter entirely. Starting a new job is always going to be hard in terms of sleeping patterns, but if I have to lie there for an hour, so be it. I have books everywhere, and I’ll most likely dive into a ‘Harry Potter’ to calm me down, or do some acting.

Unfortunately, I’ve said to myself that continuing those ‘Emmerdale’ clips will not a) be productive due to the early start and b) would not be sensible until tomorrow in general. The fact that I’ve had a mini migraine would not help, either.

All that’s left for me to say is wish me luck, because I want this to go smoothly.

I really, really want this to go smoothly. More than anything I’ve ever done before (like, as much as hoping the book is published.)

PS As it is the first week in a new role, there probably won’t be that many posts, but I’ll see how much energy I have left! Thanks, all x