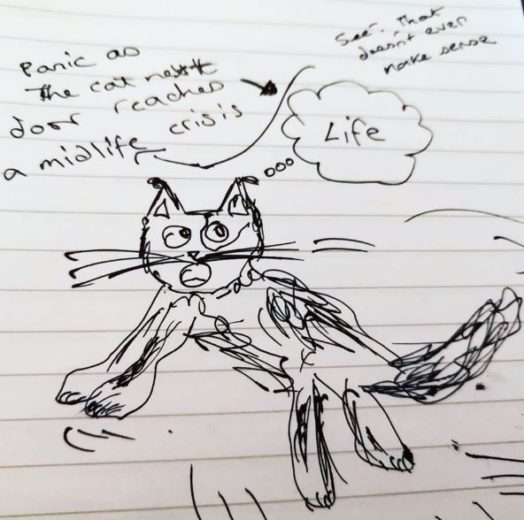 The power of imagination is a gift.

It can also be a virus.

Let me give you an example.

Starting this new job has been wonderful. After all, I have a role that helps children. I’m reading to them, teaching them new words. In the week? I explained about the magic of books (as one wasn’t big on reading.) I’ve only been in the school for nearly a month, and yet, I’m learning so much.

Why then am I so against myself, my abilities, me as a person? I’ve already mentioned about having anxiety. This is more than that. For the past couple of days, I was wracking my brains over what I was going through, and then it hit me. I had ‘inferiority complex’, or ‘Imposter Syndrome.’

I belong there. I know I do. However, it’s as though a grinning demon is waiting for me to trip up. That’s the best way I can describe what my thoughts do. There’s a pattern. It’s a downward spiral that is often kick-started with just a single idea:

I’m not good enough. This in turn makes me believe it, just those four words. They say words can’t hurt you. Those people have never understood the concept of actually one hundred percent thinking that what their brain spews out is true.

Another? They’re regretting hiring me. As Hermione says in ‘The Prisoner of Azakaban,’ “What a load of rubbish.” Deep down, I’m aware that it’s just my mind spinning out of control, but sometimes it’s like my brain is on a non-stop route to self-sabotage.

People don’t like me. I’ll often envision those I’ve just met as smiling to my face, but then talking about me behind my back. Again, this is demoralising to my confidence issues. It’s also not fair on my new friends! It’s imagination a lot of the time. Note: As a writer, it’s my natural brain space to create dramas, conflict, adventure stories…. but I definitely need to differentiate between the two in order to ‘give myself a break!’

It only took three statements plaguing my brain to – potentially – begin to unravel the good work that I’ve put into the new job. I won’t let that happen. I spoke with the teachers who hired me about my lack of confidence, was worried they didn’t think I could hack it, and then what happened? On Friday, they’re saying “We think you would be so good in this class, too.”

Is that an implication that they don’t believe in me? No. Entirely the opposite. I’ve bought a book today, and read quarter of it on the train. It’s called, ‘The four thoughts that f*uck you up, and how to fix them.’ I found the title so inspiring, and I’m all set to follow what it says between the pages.

It’s not going to be easy, but if something’s worth fighting for, why would it be?

In conclusion? In order to be happy, fully, learn to work on loving the one person who needs, well, a little TLC:

Anyone else struggle with destructive thoughts about themselves? Let me know in the comments x