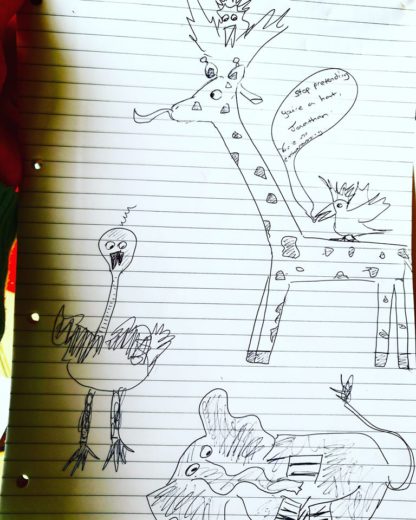 It’s been a week since my life turned upside down, inside out, and fallen down the rabbit hole into a matrix-like reality. Again, this is not a portal in which I am going to explain what’s happened, but I will be voicing my thoughts in terms of metaphor.

Why have I chosen The Matrix as my subject for today? Easy. The protagonist, Neo has a bumbling existence that he struggles through. There are major things that he has to deal with; esp. not fitting in at work, a complete dissatisfaction in himself, a sadness that gnaws at him, a feeling of being lost in life.

That’s not to say that I have never been happy. Of course I have. In fact, there are many times where I’ve believed that I’m a very lucky person, and known it. My family are rocks. My friends are my support network. I’ve spoken to counselors, and there have been nights where I have felt – everything has gone back to ‘normal’ – whatever that phrase means –

In the last week however, I have been in a really bad place; and yet, this is a place that I can breathe.

It’s hard to explain without going into detail, but what I will attempt to say is that the world is at peace, for the first time in years, my world I know is in a state of calm.

I’m no longer alone. I can speak to people who – prior to many events – I was never allowed to communicate openly with. There is no longer an anxious feeling in my throat. I’m not dreading facing my emotions alone.

We’re all in this together now.

Without going into too much detail, the reason why it feels as though I’ve swallowed a red pill in the Matrix is because things are happening around me that would never have happened before, good things. Positive things. It’s a reality that I never would have believed possible.

I had become so used to feeling abandoned in myself that I didn’t realise until afterwards how much I was suffering in my thoughts.

I kept busy all the time of course, which helped. I was reading, writing, acting (mostly ‘Harry Potter,’) watching ‘Emmerdale’ and coping in really healthy ways with my depression even though it was a gigantic Dementor of the mind. I have looked back and feel brave. This is why I jokingly sorted myself into Gryffindor recently.

Now, I’m imprisoned in my own mind; the corridors of my past shadowed by everything I was going through. I managed to chat with a few people about my all-consuming battling depression, but – as I said before – didn’t understand the severity of my moods.

There’s a horrible backwards kind of relaxation now. I’ve taken the red pill that Neo is offered, but instead of being inside a computer, it feels like I’m living a lucid dream non stop, drifting from hour to hour, knowing the floor is beneath me, but it doesn’t feel possible that it is.

Lemony Snicket described something the Baudelaire orphans were experiencing as ‘…as though there is an extra step on the stairs, and your foot passes through.’ I’ve never understood. Credit goes to ‘A Series of Unfortunate Events.’

There are moments I can’t put into words. I feel blissful and strong, and alive, and then there are moments that I feel the exact opposite. Like today. I have giggled lots earlier. I’ve also been close to bursting into tears. I’ve had a glass of wine, and smiled, did some music with Dad, and chatted with so many wonderful people that I’m so grateful to have in my life.

I’ve needed to write another entry for a while, but I’ve been painfully wrapped up in all that was going on with me that I haven’t had the time or inclination to chase this. Is that the right word? Doesn’t matter, it’s not the point of this account.

My next entry will be a return to cartoons (as my latest sketches imply!) As therapy, I have been pen sketching more animals. The one that is my cover for this is a recent creative expression from this afternoon.