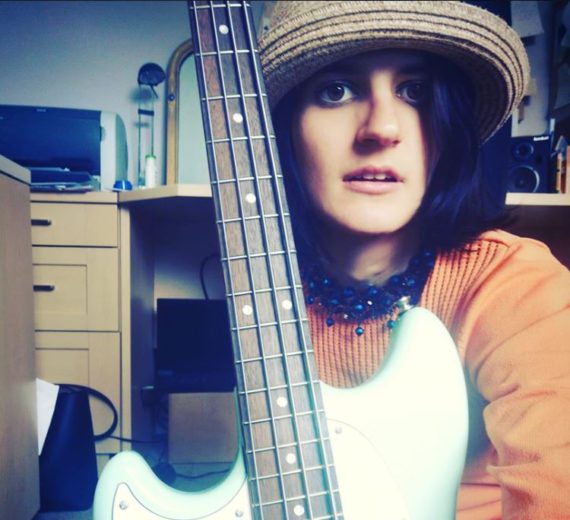 When my singing teacher joked, “You’ve played the keyboard in videos now, you should play the bass next time!” I allowed myself a giggle.

Me? A bass player? The idea was ludicrous; a notion for a comedy show…. and yet….

The next evening, Dad suggested that I try his out. It took me five minutes for my fingers to get adjusted, (and lots of ‘oh come on, you….!) but with a little practise, I was able to pluck the strings for the first time. It felt right. It felt secure, like I had made a new friend already, but wasn’t sure how our relationship was going to develop. All I knew was that I wanted to keep playing it.

Watching ‘Austin and Ally’ on Disney +, I saw that Ross Lynch was using the bass that Dad had (the exact model I was rehearsing with!) This, naturally, made my night.

During the next week, I learnt my first strumming set, ‘Valerie’ by Amy Winehouse. It took a long time for me to be able to sing along with the notes, but I managed with dedication!

I began to work out some other songs on my own just to test out what I could do, and – as the title of this entry implies – one of those songs was ‘Year 3000’ by Busted. I was so happy that I could play it that I even did a live video, tagging James Bourne on Twitter. I don’t think he saw it, but I tried and that’s the main thing.

Over the next few days, I started researching basses that I could get. Now, I’m notorious for trying an instrument and giving it up (cough, the piano, the saxophone,) so before I decided to purchase a bass, I made sure that it was something I really wanted to learn.

It was as though another glittery realm had opened for me, words such as ‘Humducker’, ‘Squier’ ‘Fender’ etc. I quickly learnt – through extensive, obsessive research – that Matt Jay Willis from ‘Busted’ plays the bass. His is a Mustang Fender Squier; a cream and golden-brown marble design.

I wanted one…. and after looking up and comparing and watching review youtube videos, I eventually bought the same make, but in a surf green.

Other artists to have this particular brand include: Mikey Way from ‘My Chemical Romance,’ Norah Jones, Billy Joe ‘Green Day’ and a host of other famous musicians that made a personal stamp on my childhood. As I never really grow up, they still have a huge impact.

When my Mustang bass arrived, the delivery box was bigger than two of me…. It was like a huge Christmas gift, just – six months early – and given how much rubbish I’ve been through already this year, I honestly thought that this treat was warranted.

It was worth it. I love it. I love everything about it, the brand, the colour, the sound, the way that I feel ‘cool’ playing it. This is a massive deal, as I’ve always longed to be part of the in crowd and now I am.

‘Year 3000‘, (Busted) ‘For all I know,‘ (Keane) and ‘Possibilities‘ (Freddie Stroma in ‘A Cinderella Story: Once Upon A Song’ 🙂 ‘Valerie’ is also another number to go over, as Dad and I hope to gig with that one locally, and also I want to do ‘Life on Mars‘ and ‘Baba O’ Riley’ (The Who) These are both on the Life on Mars soundtrack!

When I start improving, and I’m able to play easily, I’m going to try writing a song. At the moment, I want to get my fingers used to jumping around the strings, and making a much more interesting, versatile sound, now that I’ve become more at home playing it.

I will update you on how I do! My singing has also improved too…. for years, I struggled with nasal parts in my voice, and it’s almost gone, so that made me happy.