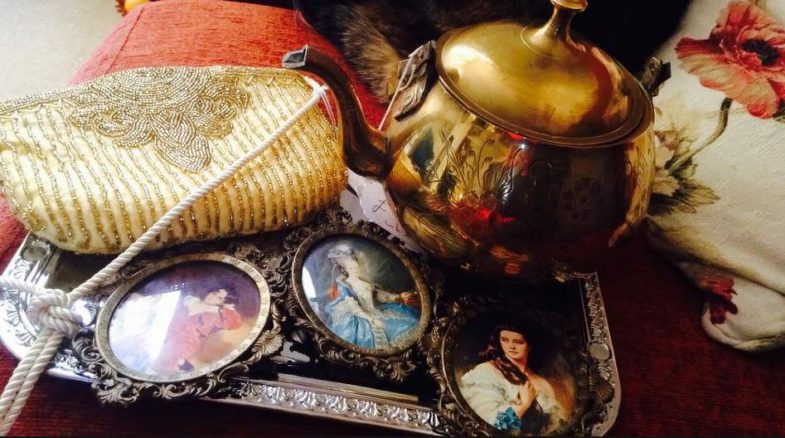 I have had this dream about being an author since 2007.

What I want to know today is….

Should I call it a ‘dream’ still, or is it wrong of me – maybe even as far as ‘cocky’ – to believe that after so much love and hard work, ‘Will Worthington and The Black Rainbow’ will eventually be published?

In all honesty, that is a really big question.

If we begin by simply factoring in the number of hours that I’ve poured into my book and the number of edits that I’ve lovingly (yet, sometimes painstakingly!) gone through with a fine toothed comb, you could argue that I have every right to now call my ‘dream’ a future reality. However – what about everyone else who have those aspirations? They will have worked as hard. I don’t think anyone else will have believed enough to buy ‘props’ for visiting schools, like my golden teapot (and pineapple one!) etc, but that’s just part of my acting, so, I collect those kind of things anyway!

As authors who frequently dream along our carpet of stars, we have this rule. Don’t. Compare. To. Others. It’s a challenge, though; at least for me. After all, we want our books published, and – not all – but a huge majority, want theirs to be traditionally published, and this means confronting your internal fears as a writer and going out and ‘baring’ our souls to people in the industry we wish more than anything to be accepted by – their inner circle, the ‘chosen few’ – and then, we have made it. We’re one of the professionals….

Aren’t we? There’s the Imposter Syndrome to deal with, too…. that nasty, whispering demon that sits on your shoulder and hisses in your ear that you’re worthless, stupid, that nobody will care about your dreams; that you’re just going round and round with no finish line and no award in yourself. Why? You don’t deserve it…. We have to shut this voice up, but, it’s hard.

I watched a Zoom chat with M.G. Leonard (the woman who told me about Golden Egg and ‘Beetle Boy’ author) and she said that there is a line between the ‘dream’ of being an author, and the ‘reality.’ She spoke of the nerves she felt when her book was eventually released into shops.

Admittedly, I hadn’t considered the pressing fear that would materialise when this happened, thinking only of the excitement. It’s not realistic. We’re all human, and – as creative human folk – we will want to hear that what we’ve dedicated our lives towards has made people happy. Nonetheless, there will be those out there who don’t share these views about your book. It’s going to be something that will require thick skin, (one could say further that it’s akin to auditioning, for, say, The West End!) Not everyone is going to like what you do, who you are.

What we all have to remember is: Opinion is individual, just because someone says ‘This blurb is rubbish’ and on the opposite side, ‘This book is going to be a classic’ does not mean that both will happen. Opinion is just that. It’s not fact.

M.G said that you don’t realise how much there is that’s expected of you, and so quickly, in a wonderful way though! It made me think deeply, and again, realise that I’ve already thought ahead of the ‘author’ process. It’s not enough to have book one written, and a vague idea of the next two or more in the series. I know that, which is why – when my time finally arrives – I want to have book two partly finished (which it is, but lots to edit still) and the plan for book three, maybe even half complete too.

Does this put me in the minority? Who else does this? Thinking for the future, even though it might be foggy at the moment and you can’t see all the way through your clouded windscreen of dreaming…. I just feel that if you’re on a further path, you’re not only more confident but also you’re more knowledgeable about the whole arc of writing life. Aren’t you?

I want to be so ready – more than ready – to present to literary agents and then they can sprint to sell my book to publishers. I want them to not just ‘consider’ my series, but have to have it or they’ll kick themselves. Do I deserve that? Is it good enough? These questions emit from the voice of the Imposter Syndrome demon again. All I have to know is I’m going to do everything I can to get there, and if I stumble and fall, I’ll pick myself up and work so damn hard that eventually I’ll not only stand tall on the outside, but on the inside too.

A ‘yes’ from the industry professionals is life changing, but if they’re as passionate and determined as you are, that’s going to make a difference too. After all, think about how many other clients they have.

You have to stand out. It’s not just the book that agents will be taking on, it’s who you are, and the personality that you have. I like to believe that I’m fortunate in a way, because I have a loud, bubbly personality and I not only refer to myself as an extrovert actress-type (You only need to see my mad voice over videos to get an idea…..)

A lot of people who are writers immerse themselves in an introvert way. They don’t like acting, reading aloud. I’m lucky in that respect that I have always loved reading aloud – putting expression into characters. On the other hand, would this make me bad at the other parts of the job, like, for example, being myself and not hiding behind the author persona? Maybe, but I’m talking with a counsellor about finding that confidence and dragging it out of me, kicking and screaming!

I am nervous too, about the demon hushing me quiet, ordering me to stop, even if I get there. I can’t let him win.

WE can’t let him WIN.

In conclusion, do I think I should call this a ‘plan’ now, or still a dream?

I’ve decided that it’s actually, a bit of both.

We have the dreams. They are plans, and we are planning to get there, and will, no matter what it takes.