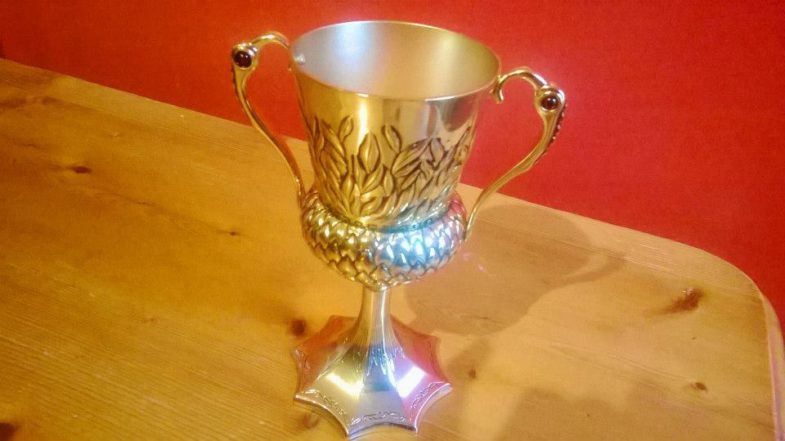 Quick note: I wrote this a very long time ago, and just copied it from Facebook now, but I thought that my Harry Potter essays deserved to be seen on my blog, just because of the time I spent on them!

and yes, that is my replica Hufflepuff cup <:)

I absolutely love Harry Potter, love it with a passion that can’t be described and so when I came to my lecture last week and heard about all of the things that it supposedly was and wasn’t, I just had to leave my mark here because I felt that the comments were not fair! I appreciate people’s opinions, but J.K. Rowling doesn’t deserve for her work to be referred to as not real life, and giving out wrong messages to children!

Firstly, her characters are true and realistic.

It has been argued that Harry as a character is arrogant and some people hate him. I think that if you had been brought up knowing that you were famous and having people admire you nearly 24 7, you would become a little arrogant. It’s the one flaw in his nature, but it’s a small one. His friends are always there to support him and make sure he keeps his feet on the ground. I think he copes really well considering. In the series he has a really bad time, really bad luck and this just continues to happen over ten years ongoing. His godfather is murdered, a student in the Triwizard tournament who he had become close to, his mentor, it seems like everybody he loves dies. They are hard things to cope with. If that was me, I think I’d just have said to pull the plug!

What’s great about the three of them (Harry, Ron and Hermione) is that they all have personal strengths and weaknesses and they help eachother when they need one another the most. For example, Hermione has a cool intellect when ‘others are in grave peril.’ Harry is brave but not in the typical hero sense. He doesn’t like being famous, and this again leads to another layer of his character. Yes he does become a little arrogant on the ocassion, but he mostly denies his importance in the series because he wants to be as he so eloquently put it ‘just Harry.’ Ron is braver then he appears to be, but it’s not his intelligence or his bravery that make him unique. It’s his willingness to help and his ability to see the positives in things that help them.

Throughout the entire series, love is the one redeeming factor in all people and that is very important to remember. Harry has a lot in his life to deal with from a reallly young age. He watched his parents being murdered and then he’s taken off to live with his hated aunt and uncle and their ‘dope of a cousin, Dudley’ who bullies him horribly for every year of his Hogwarts life, but he manages to get through everything through Love. He loves his friends, they love him, he loves his godfather, his school, Ginny Weasley whom he has a romantic connection with ever since meeting her but never knew he would love her later on. Most characters in those books at some point try to kill him. He doesn’t have it easy and yet Love is the one thing that pulls him through everything.

That can be said about the world today. True, not every part of the world has abundance of love in it, but most parts rely on love it is the glue that keeps everyone together, gets them through anything. There are wars, there are murders, there are starvations, etc but everyone finds love somewhere. After a war, the people come together and either rejoice or comfort, when a murder happens it’s the same and so on and so on. What J.K. Rowling does so magnificently is that she reminds the world around us, and the readers that there are not BAD PEOPLE and GOOD PEOPLE, there are different shades. As Sirius said, “The world isn’t split into good people and Death Eaters. We have all have light and dark inside of us.” He also goes on to say that the choices we make, that’s who we really are. It is true.

A perfect example of this is in the character of Draco Malfoy who is a shade of grey. Rowling teaches children about the prejudices that life has ie when Draco refers to Hermione as a ‘Mudblood’ and hates blood that isn’t pure. Rowling even said that this was her way of teaching children that the world isn’t all sunshines and happy picnics. There are bullies in schools and some not nice people in the world but the most important thing in all this is that she highlights an area of the young Slytherin that everyone must take into consideration, that he loves his family most dearly and it is the one aspect that enables him to make the right choices in the last two books. Now, he’ll never be perfect but he loves, which makes him have a conscience and stops him from doing anything evil. He’s not evil, he’s just misguided.

Messages to children…… The series is really dark. I completely disagree that the books show bad messages to children because some really horrible things happen in the series which brings me back to the point I made earlier about it being about the bad and good in life and that everything is most certainly not perfect and that we have to fight in this life. Harry Potter survives because one) he’s had a bad enough life! two) the children look to him as an imperfect but wonderful hero and three) it shows that everyone has to have hope in this world and that if you do, you can succeed. I think another reason why she didn’t kill Harry off is because she wanted to teach children that there are nasty people in the world but that if we all pull together we can fight it.

Anyway, I think I’m going to stop now because I could go on…..

5 thoughts on “The Personification and Justification of Love in the Harry Potter Series And why J.K. Rowling did what she did!”