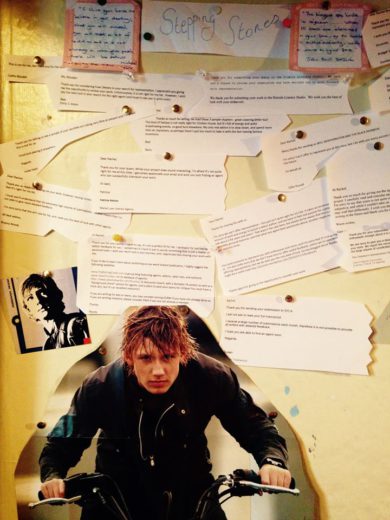 Heya guys, many of you on Twitter wanted me to share a few writing tips in my blog, so I’ve compiled the top ten tips that I have picked up through the years ☺️ I hope you find them useful.

1
Inspiration can be found everywhere…. and often in the most unlikely of places!

My second week in BA Hons Creative Writing at The University of Gloucestershire, our lecturers arranged a day trip to the local arboretum, for ‘inspiration’…. I didn’t think I would find anything to be honest, and believed that creativity was something that could not be forced. As I soon discovered, I was very wrong.

On the verge of stopping for lunch, I ventured into a garden with unusual statues, gigantic rocks, and different species of trees, and was hit by an intriguing concept….. “A brother and sister get separated in the woods, and a mysterious stranger appears from a different world…..”

I must have looked mad, muttering away to myself, but I was so hooked on this idea that I started scribbling. My first paragraph of (what was then called ‘The Mountains of Austassa’) was cluttered with cliches and poor dialogue. I was young and naive, but it didn’t matter….. That was why I was studying, and the main thing was, I had started a book. Little did I know that I would be editing it for the next fourteen years, and that the book would later be known, forever, as ‘Will Worthington and The Black Rainbow’…..

I have thought of book ideas whilst doing the washing up, acting out my characters, interviewing my characters, and from dreams….. No time is ever wasted for a writer. Everything can be used.

If a character is nasty, why are they like this? It is not enough to declare something like, ‘because they’ve always been like that,’ there have to be reasons, and those reasons need to be justified or they’re simply – as the term is in fanfiction – Mary Sues or, 2d personalities.

An example of this is the whole superhero and supervillain theme that just mean they hate one another on principle. This isn’t realistic at all….. Villains should have weak spots, fears, bugbears, etc, and there should be clear reasons why they despise one another…..

Even the hero in your book should have negative traits…. My main character, Will isn’t just brave and friendly, he is also naïve, and this is his Achilles heel. He judges a lot, is consumed by grief, and has a very low confidence, which hopefully people can relate to, and this makes a well rounded personality. Look at Harry Potter…. He’s brave and kind and loving, but he’s also stubborn and grouchy!

Plotser or Pantser? You can be both

When I started my first draft (circa 2007, The University of Gloucestershire) I had an idea in my head, but I wasn’t quite sure how to follow it through. The second draft, I did a mixture – keeping the basic plot, but improvising the rest.

Once I had been accepted into Golden Egg (2016), I had the basic layout in place, but with their expertise, I was slowly able to see ‘the wood for the trees’, and grasp what is at the core of the book – and over the years that I was a member – I gradually arrived at the point where I am now…. I have a book that is almost ready to go out on submission – the characters are basically there, the themes are concrete, and I have got here in so many ways – sticking post it notes all over the walls, doing chapter plans, interviewing characters, and all the time, keeping to the main narrative.

When I was younger, the idea that all successful writers needed to have regular breaks was horrible to me – why would you stop when you were so into what you were doing? It made no sense….. Didn’t breaks mean that you would be ‘held back’ from your dreams?

Everything was about focus, commitment, and go, go, go, even skipping lunch! Food? Rubbish! My usual writing periods would be (on days off) from about 11am – 6pm, which, whoever you are, is not a healthy thing to do. If you have a deadline for your editor/lit agent/publisher the rules might be different, but you still need to make sure that you’re looking after yourself!

In Golden Egg? I would edit for two hours in the morning, break for lunch, and then return for the last two hours…. That was enough 🙂

As writers, we are naturally creative souls – and that being said, when you’re researching a character/place/backstory, it’s always really enjoyable to go above and beyond with ideas!

For example, as my book is set above Austria, I went into my local travel agents and asked for a handful of travel brochures, so that when I got home I cut out photos of the castle in my book etc….. My walls were covered with images. I bought a car magazine, and annotated it in Will’s writing (sort of like when Rowling bought out ‘Fantastic Beasts and Where to Find Them’ for Comic Relief)

I have made a Facebook profile for my three main characters, a Pinterest board for them, and I have files of photos on my computer in general…. I will always stay true to the fact that I know exactly what my characters look like, so I like to have certain actors from movies, or models etc so everything is authentic…..

I often interview my characters (I have about 50 pages of this) which is always interesting, because you never know what their reactions are going to be. I act my characters out over camera too, or just improvise quotes and have to write them down in a mad hurry….!

In the past, I have also collected many different ‘props’ from my floating land, including (but not limited to…..)

Many writers don’t like ‘killing their darlings,’ and I really can understand why…. You might have spent over three hours on one chapter, and then realised that it didn’t fit (This has happened to me lots, especially this final edit!) but the truth is –

….if something doesn’t sound right, or looks out of place, the general rule is it’s not meant to be there – now, that’s not to say you can’t or won’t use it later, but for the time being, there are other ways, better ways. I had to cut a whole chapter (around 3,000 words) because there was a shift in perspective, and it jarred…… As I later realised, too, there was maybe too much exposition….

I have often written a huge chunk, and then – during later editing revisions – spotted that this whole section didn’t need to be there. It didn’t add to the plot, tension, character arc, or overall feel of the book –

If it doesn’t flow,

This is my new mantra

This might just be a personal bug bear of mine, but as a rule of thumb, I can’t stand too many adjectives.

I would much rather SHOW than TELL an emotion!!!!! Let’s take Harry Potter again.

First, I’ll give you an example of how I would not write this…

“How can you be like this?” Harry spat angrily, kicking the table. “I’m done!” He left the room, still incensed. You don’t need to say ‘angrily’ after Harry has spat, because spitting is an emotion and an action that we all understand – and adding on ‘still incensed’ is very poor writing!

Now, I’ll give you an example of how I would write this…..

Harry kicked the table. “How can you be like this?” He ran his hands through his hair. “I’m done….” Leaving the room, the door slammed behind him. Notice that I didn’t even use the word ‘spitting’ – we can tell that Harry is angry, and that I added in another two actions? It’s obvious that it was Harry who slammed the door and raises the tension, too!

Please note: As I said, this is just my opinion, (and you can use adjectives) but I will never like telling more than showing – and it is something that has been drummed into me since university.

Write for yourself, before anything, yes, even the market

Quick Tip: The same is also true when it comes to feedback from any professional – if it’s not what you envision for your book, if it doesn’t work, you don’t have to listen to it…..

Personally, my love has always been for upper middle grade, because I love the villains, the sprinkling of humour and the imaginative settings, but if I saw that – (let’s say) women’s fiction was popular, there is absolutely no way that I would change what I wrote to fit in. What would be the point? I wouldn’t care about writing it, I would not enjoy it, and even though – yes, the women’s fiction lit agents would more likely take me on, you wouldn’t be happy at the end….

Also, in the blink of an eye, maybe the next week – the hot trend in the industry would shift again – and you would be right back where you started….

Stay true to yourselves, guys

When I first approached my list of literary agents in the year 2014, I researched thoroughly. Who did I want to represent me? Why? How could they offer my book the best representation?

With my always-handy-can’t -live-without-it ‘Writers and Artists Yearbook,’ I looked at what every agency wanted and sent my book out. In hindsight, I probably should have visited a few of their websites more extensively, but research – like when you go for a job interview – is everything. The first offer you get, make sure that it’s who you want. Ask yourself the following – Are they right for my book? Do I have a good relationship with the agent/do they understand what I see for my book/ideas in the future? If you answer no to even just one of these questions, you probably need to look at some more lit agent options….

Due to everything I have learnt in GEA, (Golden Egg Academy) I know who to approach. I know how to write the ‘dreaded synopsis’ well. I know how to communicate with literary agents (remember, they are just people like you and want the best for you too, as well as their agency!)

When you find the right agent, trust me, you’ll know

Yes, I am ending with a really obvious point here but, hear me out…. Through your writing career, you are going to encounter setbacks, rejections, people telling you that you won’t make it, it’s not a ‘proper’ career, and ‘get a real job,’ don’t listen to them! Keep your day job, because it is true that most writers don’t make that much money, but never give up on the one thing you want to do more than anything.

Throughout my writing life, so far, I have had –