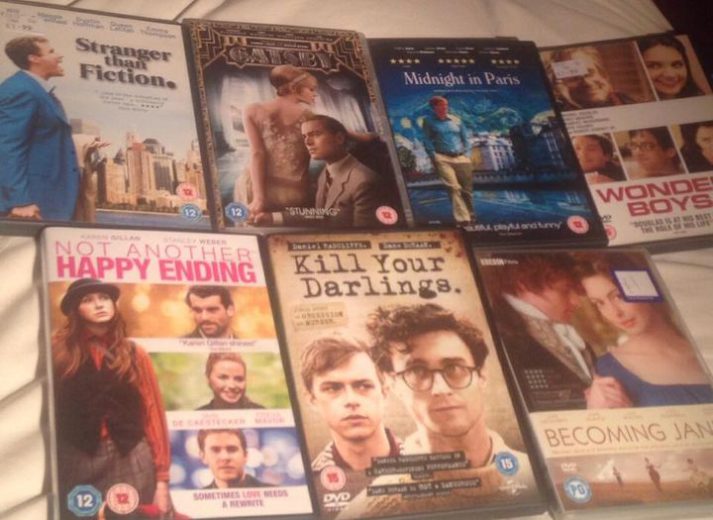 Okay, so there are a lot of writing movies for us to enjoy, but unfortunately many are lost in the generic whirlpool, those films with more universally relatable plots, (although, being a writer myself, I will never understand why not everyone in the world doesn’t want to be a writer)

Yes, you read that correctly hahahaha

I wanted 10, but there was only 9 that I felt strongly about 😊

This is a delightful and charming rom com, filled with light hearted moments but also a few terrifying chapters that all writers will relate to; that all-too-familiar feeling of mounting dread when the giant cursor is flashing at the top of a blank page, and you are empty of ideas…..

In fact, if I remember correctly, this is actually where the movie begins.

Meet Jane Lockhart, a Scottish writer (played by the talented Karen Gillan) who has been querying agents for years, and is slowly losing hope, when a young French publisher from a small start up publishing house accepts her manuscript, and gives her a publishing deal. From there, we encounter the highs and lows of making it as a successful author, in both comedic and poignant ways.

I’m warning you, however, by the end of the film, you will be in an all consuming writing mood, so my advice is to put this on early in the evening so you have time to get your laptop out after. The soundtrack music is joyful and filled with passion, and you will find it hard not to listen to it whilst you’re penning your next book…..

This small indie movie has a unique, stirring feel that is hard to put the narrative into any one genre. There are elements of romance, yes, but there are also very sad and moving scenes where the main character, Calvin Weir-Fields (Paul Dano) struggles with the heaviness that loneliness can bring, along with his naive outlook on women and how he can’t seem to write them realistically, as he has never had any experience.

If I was to pigeon hole this film into one market, I would probably say it was a romantic suspense….

On top of this, there are some eerie and thriller-like moments which will keep you up at night, due to the underlining truth that snakes through each pivotal time in Calvin’s life.

Where the movie really takes off though is when a woman, (portrayed by Zoe Kazan, and oddly with the same name as his main character,) walks into his life and they become an item….. Is this happening? Has he lost his mind, or is her name just a coincidence?

Follow Calvin as he tries to understand and reveal what is happening around him…. and when he finally gets to the truth, the big question that remains is will he accept it, or be tainted forever by the infatuation that stalks his every move?

Woody Allen directs this beautiful and haunting movie, which is filled with romance, drama, time travel, and a powerful message that unfolds before your eyes, as the characters show you to worlds beyond your wildest dreams.

After a three-minute tour around Paris, through atmospheric, rainy lens, we join Gil, (Owen Wilson), a successful screenwriter in LA whose hope is to make it as an author, mirroring his 1920s literary heroes, those who liked to walk in the rain down the glittering streets of Paris: Ernest Hemingway, and F Scott Fitzgerald….

When Gil and his fiancé, Inez, (Rachel McAdams, who does a wonderful job at being the whiny and self absorbed pre Madonna) go to Paris for a holiday, it soon becomes clear that something is wrong with his happiness, and as Inez goes dancing with her friends, he wanders in the rain and is approached by an old fashioned car, a car who transports him to Hemingway’s time…..

I have seen this movie about four times, it’s that good.

Daniel Radcliffe is the famous beats poet, Alan Ginsberg, in a movie that is just as much about finding happiness and acceptance in yourself, as it is about writing.

For me, what makes this film one of the greats is the way that both Radcliffe and Dehaan (playing the troubled Jack Keroac) join romantic forces, and you are swiftly taken on this sensual and homosexual journey, which is soon ripped away when the pair are terrorised by the threat of long time obsession, greed and desire. Side note: The costumes in this are to die for, and Radcliffe really suits the vintage era, especially with that permed hair.

I have only seen Kill Your Darlings once, but it stayed with me, and this is mostly due to Michael C Hall’s performance as the disturbing David Kammerer, which, for me, is the part where I really became swept up in the storyline. I won’t say anything else, but trust me, you won’t forget this movie in a hurry…..

Based on Stephen King’s iconic horror standalone, James Caan is Paul Sheldon,  a famous thriller author who has a terrible accident, and wakes up, soon being tended to by his biggest fan.

At first, she seems caring and sweet, but it quickly becomes ominously clear that Cann’s saviour is actually his nightmare kidnapper. Nurse Annie, (A menacing Cathy Bates) forces him to rewrite the next book in the series that she is obsessed with, because she hates what he’s done in his last draft, which he shows her as a thank you for rescuing him.

What started out as a near death experience, ends up as a game-of-fierce wits violent cat and mouse showdown.

The dialogue between Bates and Caan is razor sharp, the pacing is impressive, and, as the story is told predominantly from Paul’s view, you really feel that you’re experiencing this peril alongside him. The way that everything is presented, you really feel like King is telling you that nothing will repair…hope is lost, and there is absolutely nowhere for optimism…..

Another chilling King adaptation, Secret Window focuses on the themes of  isolation, alcohol, grief, and paranoia. Cue Johnny Depp. He plays Mort Rainey, a prolific thriller author who is fighting terrible writer’s block and has been alone for months. He lives by himself up in the snowy mountains, and is visited one day by a strange cowboy who intimidatingly claims that -Mort has stolen the idea for his book…..

From there, brace yourselves to enter a series of gruesome events, paranormal activities, and get ready to feel suspicious, about everything. There are flashbacks too, which confuse you even more but – at the same time – keep you on the edge of your seat, hoping that all the dizzying questions will eventually be answered!

I have only seen this movie once, but now that I know what’s really happening, what binds the whole narrative together, and the outcome of all the creepy twists and turns – I will definitely be watching this again.

J.M. Barrie is magically brought to poetic life by a frustrated and ambitious Depp, in this brilliant retelling of the playwright’s journey to fame, and all the challenges that he encountered before Peter Pan became a worldwide success.

We see him stumble through the usual artist’s private and psychological torture; namely writer’s block, crippling rejection, and yet, Barrie is so inspiring. The relationship between him and Mary – played by Radha MatchellMitchell – are fraught with social tension; the tensions of how difficult it must have been to feel openly and sourly judged by everyone who knows you – and the dangerous ramifications of what occurs when the evil of gossip spreads….

It is fascinating to learn the truth behind how Peter Pan came to be – and it is heart aching to see the playwright fall from grace.

Depp’s spiral into self-destruction, depression and anger makes you think there is no light at the end of the tunnel, and when tragedy strikes the heart of his own family, get the tissues, because you are going to need them! Nonetheless, the movie also carries a magnetic message; that no matter what happens, no matter how many hurdles, all of us have the power to realise our dreams, and perhaps, the harder they are to obtain – the more rewarding they will be when we finally get them.

Will Ferrell is Harold Crick, an average man who does the same average thing, day in, day out. He brushes his teeth. He goes to work. He has a – generally speaking – ordinary life, but one day, something weird happens. —- starts hearing a woman’s voice (Emma Thompson) who, he quickly comes to realise, is narrating his life – every action that he makes.

Thompson is a famous author who is writing her next book, but she is overcome with writer’s block (such a common theme for us all it seems!) Her optimistic publisher (Queen Latifah) gives a great, strong performance and this gives the movie a perfect balance of humour, to go alongside the pathos that Ferrell has in every stride….

How do the two lives correlate? Find out more in this romantic comedy….

I was a little sceptical about watching this at first. It is ‘unofficial’, so, not approved by WB or J.K herself, but then I became curious; drawn in by the compelling story of Joanne Kathleen Rowling, who later of course, became known all over the world as J.K. Rowling, author of the Harry Potter books, and The Strike series under the pseudonym Robert Galbraith.

We see her imaginative childhood through the eyes of herself, family, and friends, and then observe her as an adult, as she deals with relationship troubles and life changing events which shape her into the author that many writers idolise today,…

We see her as a French teacher. We witness an argument with her boyfriend. Our heart breaks as she grapples through family trauma. That said, the acting in this real- life documentary is – mainly – questionable, don’t expect any Oscar winning performances. The movie does however fill you with yet more hunger for achieving your dreams, an undying hope, and you will be aching to write your book by the end of it….This is the sort of film you will want to watch, kicking back after a long week at work!

It fueled me with more determination…..